In the afternoon of February 24th, at the beginning of the new year, Wujiang Districtovernment held the Pep Rally for Quality Development, during which the outstanding enterprises of 2017 were honored for starters. Eurocrane won the four honorary titles, namely Top 100 Enterprise of Wujiang District, Top 100 Taxpayer, Provincial Corporate Technology Center and Outstanding Investor Beyond Borders & Economic Partner awarded by Wujiang District. 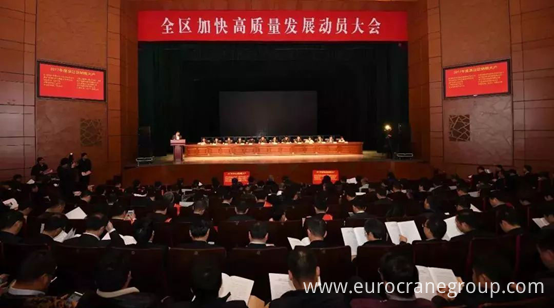 In 2017, Eurocrane successfully became listed at Shanghai Stock Exchange, seized the opportunity of the time, devoted itself to innovation and creation, focused on quality development, aggressively promoted further integration of big data, intelligence and high-end manufacturing, expanded its business layout to new technologies and industries, picked up its pace of becoming a global force, enhanced its driving force for further development and continued its momentum of sustainable and healthy development.

In 2018, Eurocrane will make the most of the capital market, fully carry forward its course of becoming a international force and try to build itself into an intelligent manufacturer with international brand, products and marketing system.

Mr. Jaym Shang
What can I do for you?
Contact Supplier